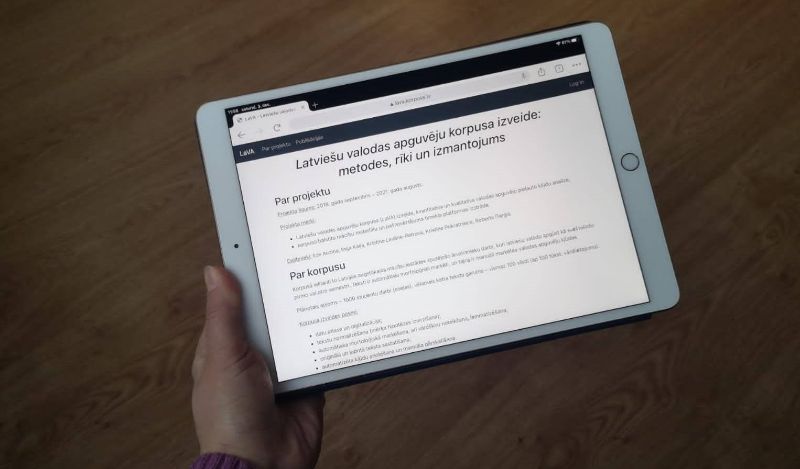 Since September 2018, the Latvian Language Learners' Corpus (LaVA; http://lava.korpuss.lv/) has been worked on by the Artificial Intelligence Laboratory of the Institute of Mathematics and Informatics of the University of Latvia (LU MII AiLab). It will be a new basis for the study of the peculiarities of Latvian language acquisition, for the quantitative and qualitative analysis of the mistakes made by language learners. Also, taking into account the mistakes of learners and the influence of the mother tongue, methodological materials for language learning will be developed.

LaVA includes works by foreign students studying at a Latvian higher education institution who are learning Latvian as a foreign language in the first or second semester. The texts have been created in the study process and have been obtained from Rīga Stradiņš University, the University of Latvia, the Liepāja University, the Rēzekne Academy of Technologies and the Latvian Academy of Culture. The corpus is expected to consist of approximately 1,000 student papers and 100,000 vocabulary.

A language corpus is a structured set of texts or transcripts of speech intended for linguistic analysis and the development of language technologies. It includes authentic language material that reflects the actual use of the language. The language learners' body contains systematic data on language learners – texts and / or decoded audio files, which usually also mark the mistakes made by language learners.

LU MII AiLab is one of the most important organisations in Latvia, which has been engaged in research in computer linguistics and language technologies for 28 years. The laboratory conducts research in various areas of automated natural language processing and machine learning, develops machine-readable dictionaries (the most popular of which is Tēzaurs.lv) and machine-readable speech and text corpora (Korpuss.lv).